Jill Croteau GlobalNews.ca
August 5, 2022  4:43 pm
Watch: Opioid poisonings in Alberta are at record highs and emergency crews are strained with increased demands. But a Calgary woman who helped bring someone back from the brink of death is hoping her encounter inspires more community response to the ongoing drug crisis. Jill Croteau reports.

Career brewmaster and business owner Christina Owczarek was walking in downtown Calgary after an event on Tuesday night and noticed a unconscious man. Without hesitation she stopped to help.

“He was laying down, just over the top of the parking barricade. I used the CPR mask that was in my naloxone kit. He was able to come to,” Owczarek said.

“As soon as the sirens were heard — he must have been alerted to them — he stood up.”

Alberta Health Services reviewed the call and said an ambulance arrived within minutes. But overall, officials acknowledge there has been a steady increase in calls for ambulances, contributed in part to drug overdoses.

“EMS came down — it was the last available car they had. We had the person responsive by the time they arrived. They had another call where someone was not breathing. So because we had already been able to stabilize and have responsiveness, (EMS) took off,” Owczarek said.

She said that’s why community members need to be engaged to provide compassionate care to those in need.

“How can you walk past someone who was unresponsive that does need help?”

She is part of an organization called Each + Every. Euan Thomson helped create the organization. It is a collective of businesses motivated to be actively involved in harm reduction.

“In the past, businesses have often been the first people to put their hands up in opposition to supervised consumption sites and homeless shelters. We want to flip that narrative and find those businesses that are willing to take a risk on their community for the sake of safety,” Thomson said.

He routinely makes rounds downtown to provide support when other resources are strapped. 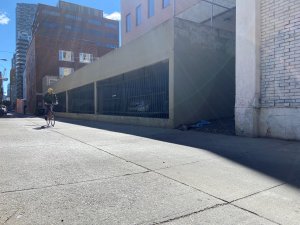 Thomson riding through downtown alleys searching for people who may need help.

“Ten per cent of ambulances are being dispatched right now for drug poisoning, at a time when our EMS services are in complete freefall,” Thomson said. “This is a situation where we can put more power in the community to respond and perhaps alleviate some of that pressure.”

Because of the ever rising volume of calls for EMS, one street outreach team has taken the initiative to recruit their own volunteer paramedic who patrols with them. Chaz Smith with Be The Change YYC said they are grateful to have the support.

“We know that we wait 20 to 30 minutes for an emergency call, as well. And most of the time it is the fire department that is showing up again, but not always in that moment where you really need them,” Smith said.

Smith said there is a critical need for housing and more resources.

“Our street outreach responds to poisonings quite often,” he said. “People are self-medicating because of the realities of experiencing homelessness.”

Thomson and his team hope to continue to advocate for more involvement from all Albertans.