One person was killed in a pileup of semi trucks on Alberta’s busiest highway Thursday morning, when freezing rain slicked over roads and highways in and around Edmonton.

The multi-vehicle collision crash happened around 6:15 a.m. on Highway 2 northbound at the Crandall overpass on Township Road 435, about 80 kilometres south of Edmonton.

RCMP said the preliminary investigation indicates a semi jackknifed on the QEII and was subsequently struck by a second tractor trailer. A third semi was unable to stop and slid into to the crash scene.

At least one person was killed as a result of the collision, RCMP said.

Global News was able to count at least eight semis and passenger vehicles that were either involved in the crash or had hit the ditch near the scene.

Shortly before 5:30 p.m., the RCMP provided an update on the crash in which they said their preliminary investigation suggests at least seven semi-trucks and one SUV were involved.

Police also said one of the damaged semi-trucks was carrying ammonium nitrate. They said the substance was contained and “appropriate partners” were involved in the cleanup of the “volatile goods.”

According to the RCMP, the person killed in the collision was a 64-year-old man from Rimbey, Alta., who was driving one of the semi-trucks. Police said they expected traffic to be rerouted for “a couple of hours” still.

“The RCMP is requesting motorists take alternate routes and avoid the area of the collision,” the news release said. “Slow down and drive to the conditions as they can vary throughout the province.”

Just before 7:30 p.m., the RCMP issued another update and said the northbound lanes of Highway 2 by the Crandall overpass had been reopened.

One of the trailers was split in half from the impact of the crash and debris from its cargo covered the highway.

Drivers and their passengers who passed the scene were in disbelief at the carnage left behind. Kim Bradshaw works in health-care and said she sees tragedy all the time.

“You just think about the families that are destroyed and right before the Christmas season too,” Bradshaw said. 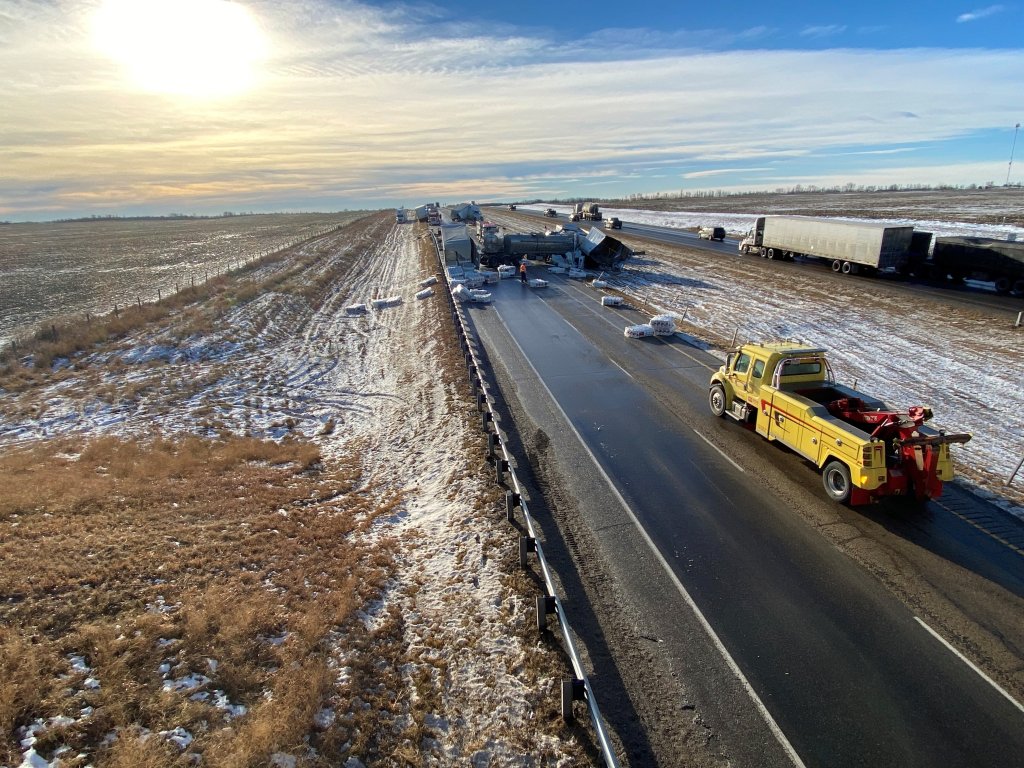 A fatal collision involving several semi trucks on the QEII highway north of Ponoka, Alta. on Wednesday, Nov. 25, 2021.The northbound lanes of the QEII were closed Thursday morning and traffic was being rerouted at the Highway 53 overpass at Ponoka.

Police said that detour was expected to continue into the afternoon as a RCMP collision analyst investigates the fatal crash.

Numerous Alberta highways were impacted by the freezing rain early Thursday and RCMP said that is believed to be a factor in the QEII crash.

The Millet Fire Department said area roads Thursday morning turned to sheets of ice and the conditions on the QEII are the worst the department has seen in years.

The RCMP asked motorists to take alternate routes and avoid the area of the collision, slow down and drive to the conditions as they can vary throughout the province.

That fatal crash occurred just before 7 a.m., north of Gibbons on Highway 28. RCMP said a semi tractor trailer and a pickup truck collided, killing two people in the smaller vehicle.

The highway was closed between Township Road 570 and 564, and a peace officer with Sturgeon County said it would remain shut down until sometime Thursday afternoon.

Shortly after 6 p.m., the RCMP provided an update on the crash. They said the findings of a preliminary investigation suggest the pickup truck was headed north on Highway 28 when it lost control near Township Road 564 and went into the oncoming lane before being hit by a semi-truck headed south that was hauling nitrogen.

According to the RCMP, Environment Canada was called and co-ordinated the cleanup of the semi-truck carrying nitrogen. They said while the cause of the collision remains under investigation, “icy road surface conditions are believed to be a contributing factor.”

The road has since been reopened.

The warnings for central Alberta ended around 10 a.m. as the system moved on.