It’s a midnight move, but there won’t be anything sneaky about it.

The historic Eau Claire & Bow River Lumber Co. building will be moved overnight Wednesday from its current location at Eau Claire Plaza to a temporary location about a block away.

The building was most recently the home of Calgary’s 1886 Buffalo Café for the past 40 years, but the owners had to vacate in April as part of the Eau Claire Plaza redesign project. That includes site re-grading to improve flood resiliency and integrate with the new Jaipur Bridge and Downtown Flood Barrier and Eau Claire Promenade projects.

Read more:
Calgary restaurant shocked to find out the city is telling them to vacate historic building

“In addition to flood protection, the plaza is being redesigned to include a gathering space at the southern end of the plaza. The gathering space will be built partially on the lumber company building’s current location,” said Daniel England, the project’s landscape architect.

“The need to move the building has presented the opportunity to place the building in a location that increases its visibility and historical presence in the area.”

Once moved, the city will be able to assess the needs of the building, which was built in 1903, to ensure it is safe and suitable for public use while construction is underway.

Temporary detours will be in place.

Wade’s House Moving is responsible for the relocation and said the most difficult aspect of the move is making sure the historic building isn’t damaged in the process.

The building, which weighs about 40 tons, will be moved using steel beams, a hydraulic jacking unit, a winch truck and a picker truck. 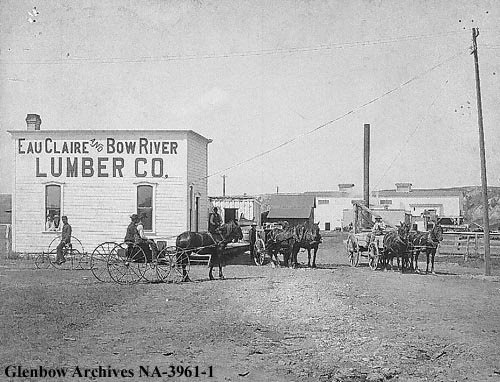 The Eau Claire & Bow River Lumber Co. was established in Calgary in 1886 by lumber interests from Eau Claire, Wisconsin  interested in the potential value of southern Alberta timber.

The company soon grew to become the largest supplier of lumber in the Northwest Territories.

The mill was located along the Bow River between 3 and 4 Street S.W. It became the parent company of numerous other local industrial firms, including the Calgary Iron Works, the Calgary Milling Co. and the Calgary Water Power Co. Ltd.

The present building was the second office erected by the lumber company and served both that business, and the power company.

“Having a small piece of the past in Eau Claire provides a window into how Calgary was founded and shows how downtown Calgary has always been a hub for innovation and our city’s economy; we hope to share that history with visitors to Eau Claire,” says Dennis Hoffart, program manager for the Eau Claire Area Improvements Program.