Last year at Radiothon, we were all inspired by the remarkable strength of Tyson Pope and his mom, Christine, as they shared their story of Tyson’s battle with a malignant brain tumour. In the face of unthinkable odds, Tyson declared that “I’m going to fight until I can’t fight anymore.” It was with that attitude that he left a lasting impression on all who met him that day – including Radiothon million-dollar matching donor, Tom Crist.

Sadly, shortly after Radiothon, Tyson’s disease progressed and he lost the use of his left hand and became weak to the point that he had to use a cane and wheelchair again. He also began to sleep for most of the day. In April, when the hospital confirmed his tumour was growing, his “cake batter” of chemo (as he called it) was changed in an attempt to slow the assault on his brain. By mid-July, he had new-found energy and mobility again. He enjoyed a memorable summer of camping and spending time with family when safe to do so. He was particularly pleased to be well enough to enjoy two glorious weeks at his grandfather’s new fishing cabin in Campbell River at the end of October. Christine has no regrets about letting him leave her side for those two weeks – “It was a trip of a lifetime for him and brought him so much joy.”

Within a couple of weeks of his return from BC, his cancer took an aggressive turn. His team at the hospital increased his steroids in an attempt to help him, as he was falling and losing mobility in his arms and legs. An emergent MRI was scheduled within 48 hours. Due to the fact that his mobility was beginning to be compromised again, Christine and Tyson decided to take a trip out to their one-level family cabin just outside of town to stay for a weekend to get a change of scenery as they awaited the results of the MRI. On the Sunday morning, Tyson woke up with very little strength. Christine got him to the sofa…and it was there that he levelled with his mom. He told her it was time to go to Rotary Flames House.

Tyson’s step-dad came and helped get him into the truck and they drove straight from the cabin to the hospital…but not without stopping to get one more order of his favourite A&W sweet potato fries. By this time, he didn’t even have the strength to feed himself, so Christine fed him in the back seat on the way.

Once they were settled at Rotary Flames House, Christine marvelled at the compassion and dignity with which the entire team treated Tyson and their family. It was a scary time as she watched her son fade away right before her eyes and she was grateful for the team’s support through those days. Even though the week had started with hopes that he might have some palliative radiation treatments to buy more time, by Thursday, his breathing was no longer stable, he was suffering seizures and had no use his arms or his legs.

Those were sleepless days for Christine as she never left her son’s side. Late Saturday night and into Sunday morning, Christine sat beside his bed and held his hand as he was resting. At 1:00 am she felt something come over her. She knew it was time. She wrapped her arms all the way around her brave son and he passed away peacefully at 1:05 am. Tyson knew he was deeply loved by his mom, step dad, dad, brother and all his family, friends and football team mates. Before he passed, Tyson planned his own celebration of life services to be held when it’s safe to gather again.

His tumour was donated to the tumour bank here in Calgary so that answers can be found to help children facing this devastating diagnosis in the future. Tyson’s legacy of hope lives on as his fight of this horrible disease continues. 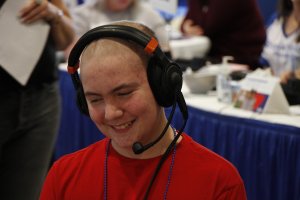 Tyson at the 2020 Caring For Kids Radiothon